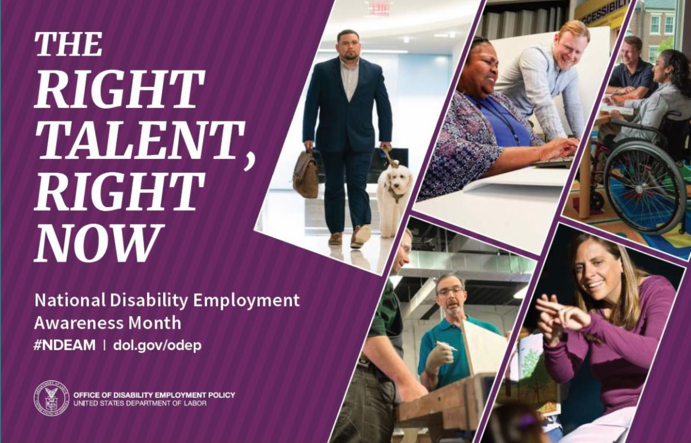 October is National Disability Employment Awareness Month (NDEAM), a national campaign spearheaded by DOL’s Office of Disability Employment Policy (ODEP), that raises awareness about disability employment issues and celebrates the many and varied contributions of America’s workers with disabilities. This year the theme is The Right Talent, Right Now, which emphasizes the essential role people with disabilities play in America’s economic success, especially in an era when historically low unemployment and global competition are creating a high demand for skilled talent.

The Right Talent, Right Now is an opportunity to highlight the fact that a talented workforce is developed through many different ways and opportunities. Innovation in employment, apprenticeship programs and appropriate employment supports are just a few of the ways a talented workforce can be developed. I am encouraged by recently signed legislation, Assembly Bill 1019 authored by Assembly Member Frazier, that expands the membership of the established Interagency Advisory Committee on Apprenticeship (IACA) to include the Director of the California Department of Rehabilitation and the Executive Director of the California State Council on Development Disabilities. It is a step in the right direction to ensure people with IDD have a voice and input when it comes to developing apprenticeship opportunities throughout the state. The U.S. Department of Labor reports the value of apprenticeships as they help businesses develop highly-skilled employees, which in turn reduces turnover rates, increases productivity and lowest the cost of recruitment.