The Social Security Administration (SSA) has proposed a rule that would require complicated paperwork more often and put benefits for thousands of people with disabilities at risk!

Social Security and Supplemental Security Income (SSI) benefits are crucial supports for many people with disabilities, and the system to access these benefits is already too complicated. We don’t need to make the system even more complex. The proposed rule would:

Learn more here about the proposed rule and the harmful changes it would cause.

This rule would increase how often adults and children with disabilities must prove that they have a disability. This process is called Continuing Disability Reviews and can be extremely complicated. People with disabilities, their families, their teachers, and their service providers often spend weeks gathering information and making sure forms are filled out correctly. Even minor errors on a form can put Social Security or Supplemental Security Income benefits at risk, as well as Medicaid services and other benefits. Unfortunately, SSA often makes mistakes in these reviews, forcing people with disabilities and their families to hire lawyers and spend years getting back the benefits they are entitled to.

The proposed rule would cut $2.8 billion in Social Security and SSI benefits.

There is still time to stop this rule. Until January 31, SSA is taking comments from the public, which the government must read and respond to before it makes the rule final. It is critical that the disability community send in as many comments as possible explaining why this rule is harmful and how Social Security and SSI helps people with disabilities to stop the rule from being implemented.

Thank you for your advocacy!

The upcoming implementation of the reversal of the CalFresh SSI/SSP cash-out policy is especially important to the I/DD community. The …

The upcoming implementation of the reversal of the CalFresh SSI/SSP cash-out policy is especially important to the I/DD community. The majority of Californians with I/DD rely on SSI/SSP for their monthly income. Yet before this reversal they were ineligible to participate in the CalFresh nutrition benefit program. A program which has helped millions of low income Californians put food on their tables.

The following information from a Californians for SSI Coalition flyer is a primer on what we need to know:

SSI/SSP Recipients Will Be Eligible for CalFresh in Summer 2019

Summary of Changes When Cash-Out Ends in Summer 2019

Most SSI recipients, individuals and SSI couples, will be newly eligible for CalFresh in summer 2019.

They will need to apply over the phone, in person, or online. If approved, they will get an EBT card and the CalFresh benefit will be loaded onto it each month.

The average CalFresh benefit for a household of 1 is $130 a month. Benefits will vary based on household circumstances.

Some SSI recipients will be living in a household where other members are already receiving CalFresh. At their
next reporting deadline, these households will be asked to provide information about any SSI recipients – and then their CalFresh amount should be automatically recalculated.

For some households, adding the SSI recipient and their income may increase the CalFresh benefit .

For other households, adding the SSI recipient and their income will lead to apartial or total loss of their CalFresh benefit . These households will be eligible to receive a state-funded nutrition benefit, either the Supplemental Nutrition Benefit (partial loss) or the Transitional Nutrition Benefit

(total loss), which will help offset the loss of CalFresh.

Starting in Summer 2019, people will be able to receive CalFresh benefits and SSI benefits at the same time. This presents a tremendous opportunity to increase food security for very low-income seniors and people with disabilities. Successfully implementing this policy change next summer will require a collaborative effort to educate and enroll SSI recipients in CalFresh.

Right now, CalFresh provides nearly four million Californians—half of them children—an average of $130 a month on a debit (EBT) card to purchase food at grocery stores and farmers’ markets. The change in summer 2019 will provide CalFresh benefits for the first time to a significant number of seniors and people with disabilities who receive SSI.

Over 1.2 million low income Californians receive very modest SSI grants to help meet basic needs. More than half are seniors, about 1 in 10 are children with disabilities, and the rest are adults with disabilities. Everyone who receives SSI is also enrolled in Medi-Cal. One third also receive In-Home Supportive Services to help them remain safely in their home.

Should people who previously declined SSI in order to receive CalFresh apply for SSI?
Yes! These individuals should apply for SSI after the change goes into effect on June 1, 2019.

As a provider, what should I be doing now?
Please do not encourage SSI recipients to apply for CalFresh before May 1, as they will not be eligible. Think through how the SSI recipients you work with will experience this change and what processes need to be in place to educate and enroll SSI recipients in summer 2019. Talk with other community based organizations and your County about how enrollment into CalFresh of large numbers of SSI recipients will be handled.

More questions?
The California Department of Social Services—the state agency that administers the CalFresh program—has set up a webpage on implementation of this change. You can also get more information from the Californians for SSI coalition. 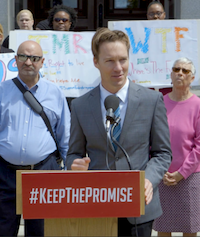