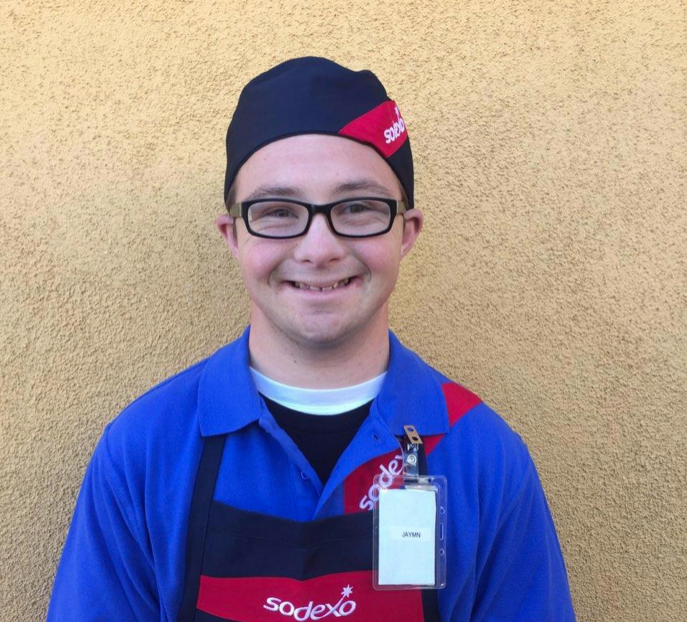 Jaymn first came into contact with The Arc of San Diego at a Resource Fair which was put on by San Diego Unified School District’s TRACE (high school transition) program. Jaymn had recently finished the program and knew he wanted to work independently out in the community, but knew he would need assistance in achieving this goal. The job he desired was a Mess Attendant position at the Marine Corps Recruit Depot, which has the largest mess hall on the west coast. This was going to be a challenge for Jaymn, since he had not had a job that was longer than a couple of hours, a few times a week. The job that Jaymn desired was full time, with a high demand in productivity. Having limited work experience, Jaymn knew he would require additional support if he was to be successful in this role. The Arc of San Diego was able to provide that to him through the Individual Placement Program.

Through the Individual Placement Program, The Arc of San Diego paired Jaymn with a job coach who assisted Jaymn with applying for the job, taking a tour, doing an interview and completing his medical and background clearances. When Jaymn first started, he struggled with learning the military policies and procedures of the mess hall and the proper steps for each of his job tasks. He also struggled with working at a consistent pace and learning what a sense of urgency meant. He found it difficult to keep up with the high volume dishes while learning how to socialize with his peers. Jaymn often fell behind when a large quantity of dishes would come on the conveyor, causing him to become overwhelmed, frustrated and confused.

With the support of his job coach, Jamyn developed a system to help with the organization of the dishes on the conveyor. This system has helped prevent Jaymn from getting overwhelmed when there is a high volume of dishes to be cleaned. Now, Jaymn is excited, confident and always comes to work with a positive attitude, enthusiasm and a smile. Through the support of The Arc of San Diego’s Employment Services, Jaymn has been able to use his paycheck to purchase things he wants and needs and is able to live a more fulfilling and independent life. In addition to having a job that he enjoys, Jaymn is active in The Arc of San Diego’s Our Place Wellness Enrichment program on Saturdays where he enjoys socializing with his peers and participating in fitness classes such as Zumba.